Behind The Scenes of The Abstract & Organic iPad Doodling Class

I believe that design principles are learned through practice. Most of us have a natural idea of what looks good. We’re just not always sure why. But I think this natural way is the best way to learn. Somebody, somewhere, decided to take their learnings and observations and put them into a set of rules. A someone like you or me. Those rules help a lot, but truly understanding creation apart from rules is something else. Trusting your brain, your eyes, and your heart, to tell you what your artwork needs, how to illustrate, and how to design is the next level, and can be learned but not taught.

Often when we think too hard, or for too long—we get stuck. I think we should try create quickly, intuitively, and from the heart. There is merit in deliberating, planning, and being exact, but I don’t think that’s a big problem for most adults in the creative industries. The problem is that we don’t create without fear of judgement (even from ourselves) very often.

So what I try do is doodle very organically and abstractly as often as I can. I play. I experiment. I set rules. Sometimes I do it every morning for weeks. Other times I doodle for an entire morning and then not again for a few days. And so, I made a class on how to play and experiment with abstract and organic shapes with an iPad – a tool a lot of people carry around with them.

The iPad is such a powerful creation tool. But there’s a tendency, especially amongst professional designers, to think that we need to adopt the iPad as an awe-inspiring art and illustration making tool. We can do that, but we can also be embracing what the iPad and digital tools offer us to play, have fun, and experiment. By using iPad apps we can create things much quicker than we can in real life. And when we use apps like Paper, which have paired-down tool sets, we can play a lot quicker. Besides being quick and easy to make stuff, it also helps us foster our creativity.

So I made the class – but it was also an experiment. I always try something new in a class I’m creating, but this one had several new aspects. I really have no idea how it’s going to be received, but it’s something I love doing, it’s something I believe in – and I wanted to share that. 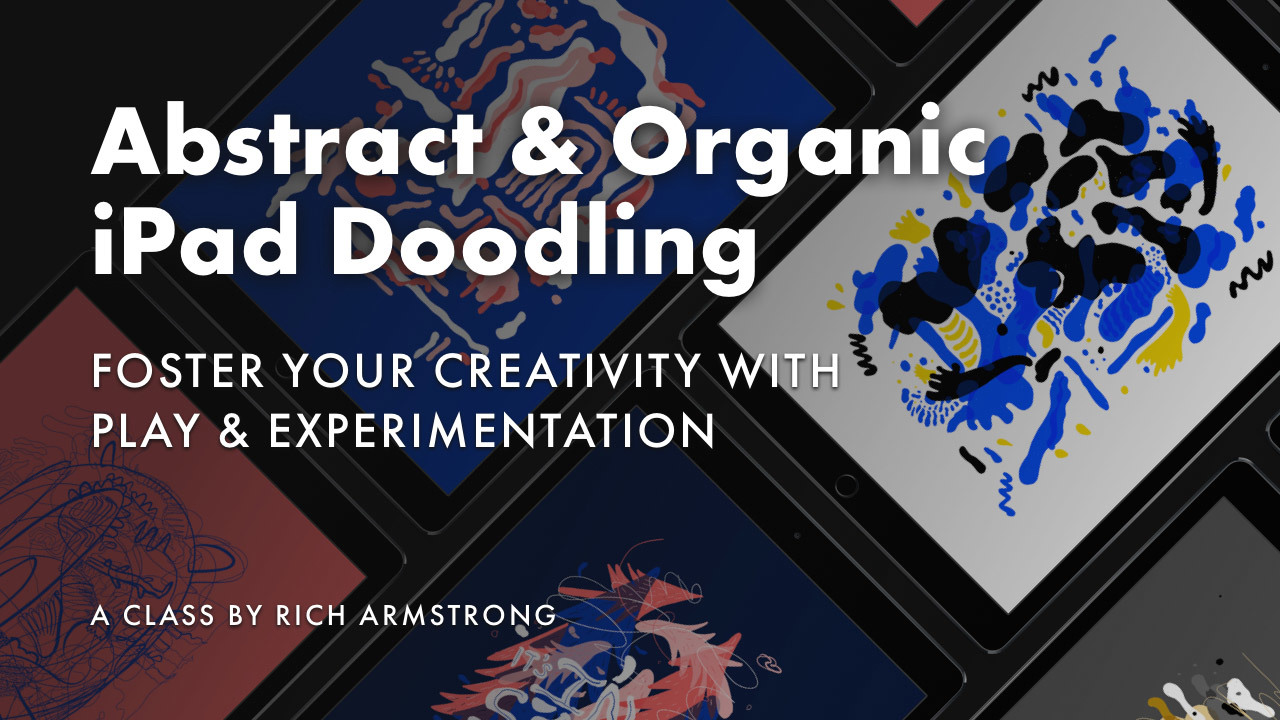 I had never used lighting before and never recorded myself doodling or drawing (seeing only my hands in the videos is super weird). So I spent some money on basic lights and another desk-clamp thingy to make the overhead recording possible and started experimenting with iPad timelapse recordings. I wanted to show the hand gestures, the Pencil tilt, and where my hands were at all times – so I opted for an overhead shot instead of recording the iPad’s screen (which would’ve made the color better). I also tried including laptops and plants to make it trendy. But at the end I thought less clutter and more focus on what I was doing was a better idea.

After I was satisfied with the initial videos I started filming the class. The end result isn’t perfect. I’m sure a super-sweet camera would have been better than my iPhone. The colors weren’t accurate and if you look closely you can see my face and equipment reflection in the iPad’s screen. Also, when I started taking my lights down (after I’d posted the class) I realised that one of the lights was setup backwards.

The whole process was super fun though. And super hot—it was over 30ºC/80ºF the entire time I was recording. Add lights, closed doors for audio quality, a bit of adrenaline and I had a sauna for a recording studio.

One of the hardest things about creating a class on play and experimentation was that some of the stuff I created during the class wasn’t that nice. They were experiments. But the thing is, that was honest and vulnerable, and because I wanted to foster that in students I had to keep it in. And because of that aspect of the class I left out my normally polished intro animation, and made it fun and super-approachable.

I hope you enjoy the class! Let me know what you think.