The bot horde is looking for a new home. Their current realm is brimming with technological innovation. But it’s also brimming in another sense—it’s overcrowded, and server bandwidth is limited.

An adventurous sect of bots decide to send forth a probe into The Doodleverse, in search of new realms to inhabit. When they find a happy realm, full of love and possibility, they decide to migrate. What they don’t know, and don’t foresee, is that this innocent step into the unknown may lead to the death of a happy realm—and maybe other realms too—because what follows in their path is The Shadow.

When the bots begin to create and build in their new realm, the influence exerted by The Shadow shapes their work into dark and gloomy death machines—void of any emotion. In order to redeem themselves, and save the happy realm they inhabit, the bots decide to search for flaming warriors—a race of mystical heart-shaped birds scattered throughout The Doodleverse.

“For Love” is a story of discovery, innocence, death, unity, and hope. 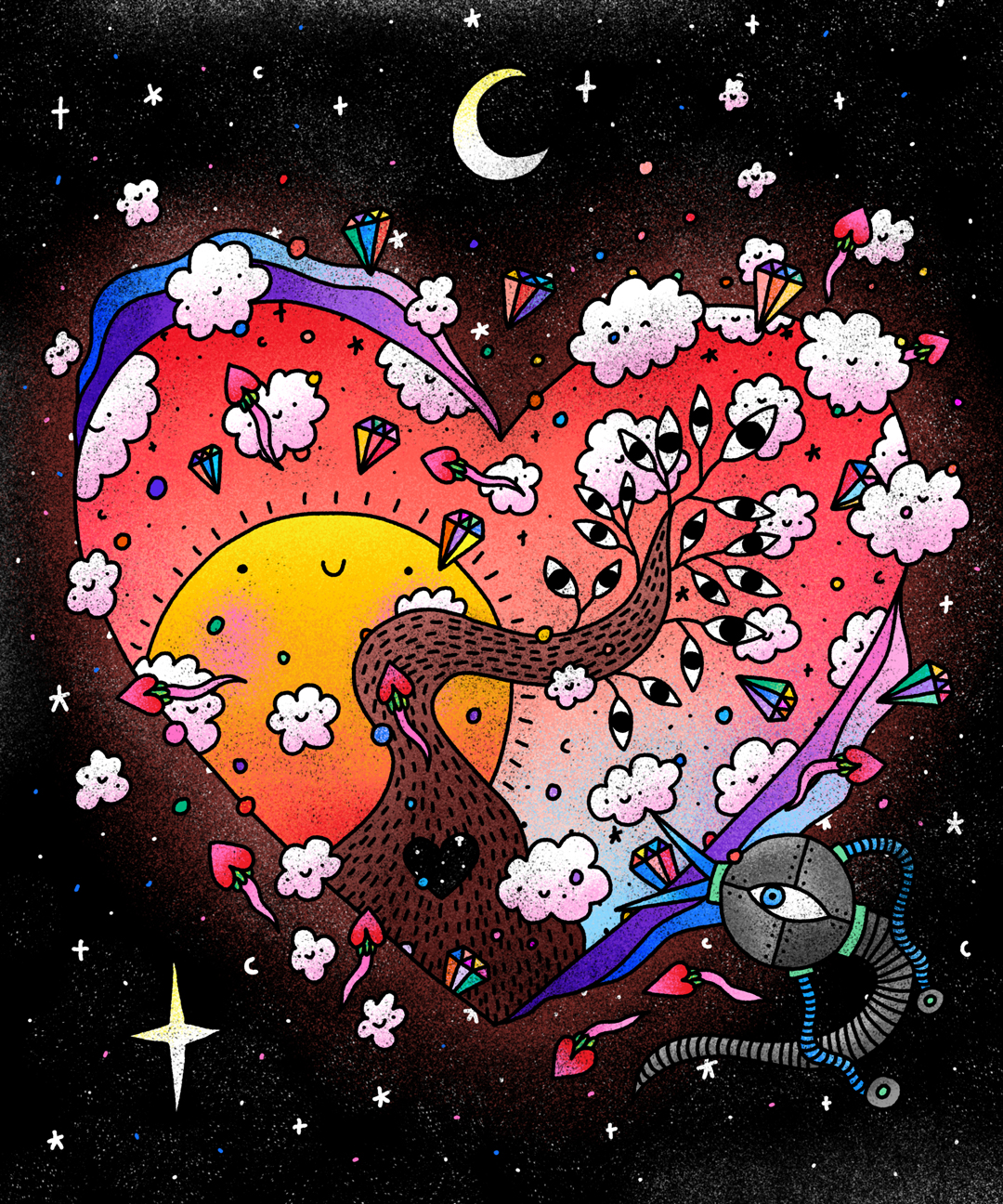 A Happy Sunrise vista caught the eye of a probing bot, peering through portals searching for a new realm to migrate to. Desire spun through its electro-mechanical mind. A perfect dimension to settle in. A perfect new home. A world brimming with bright and colourful possibilities. 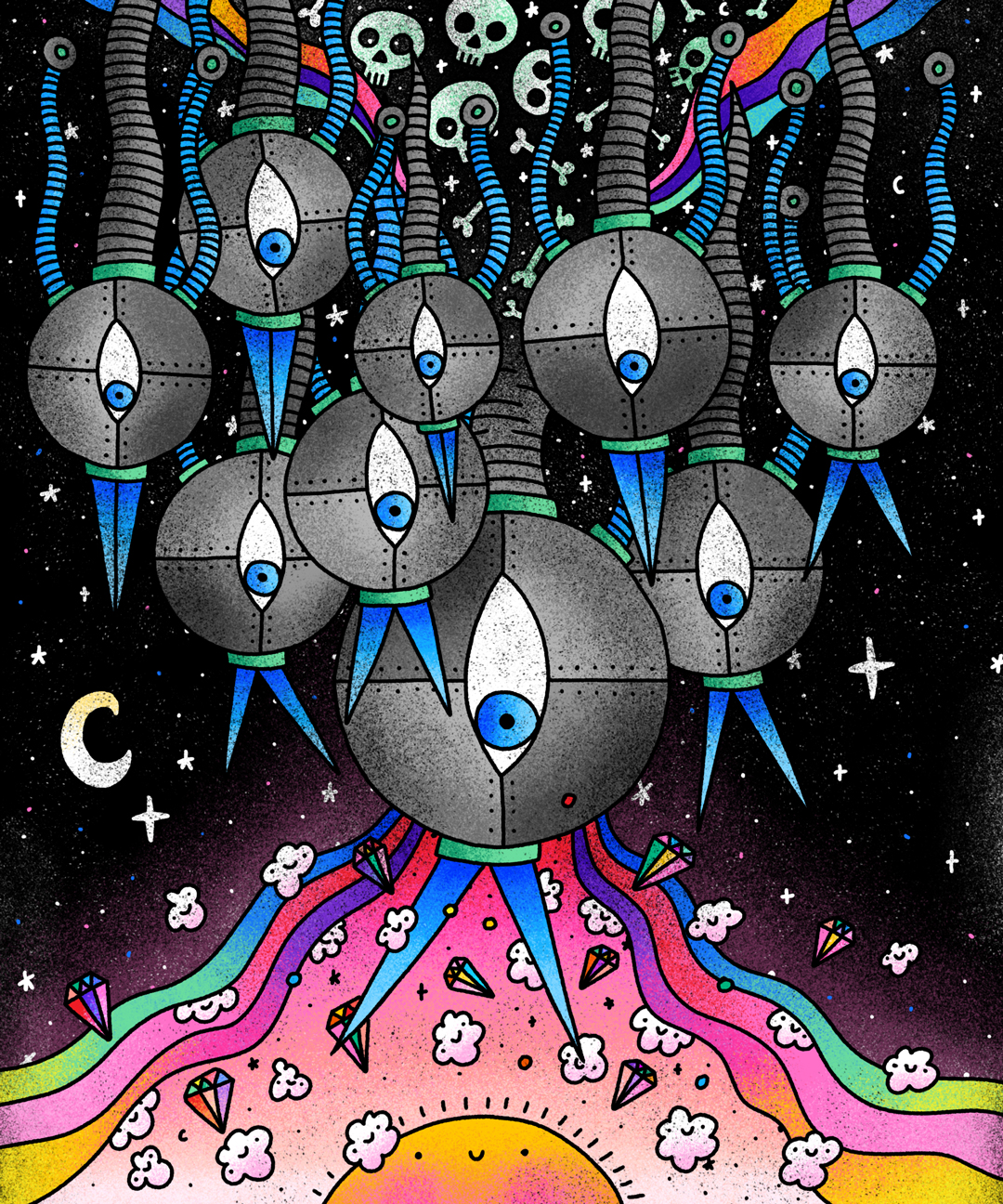 When word got out about a sunny and happy realm, an adventurous bot sect made the intergalactic leap from one realm to another. Through space, time, the cosmic realm, and deathly wormholes. Looking only ahead with whirring excitement, no bot heeded The Shadow that sludgingly followed. The invasion had begun. 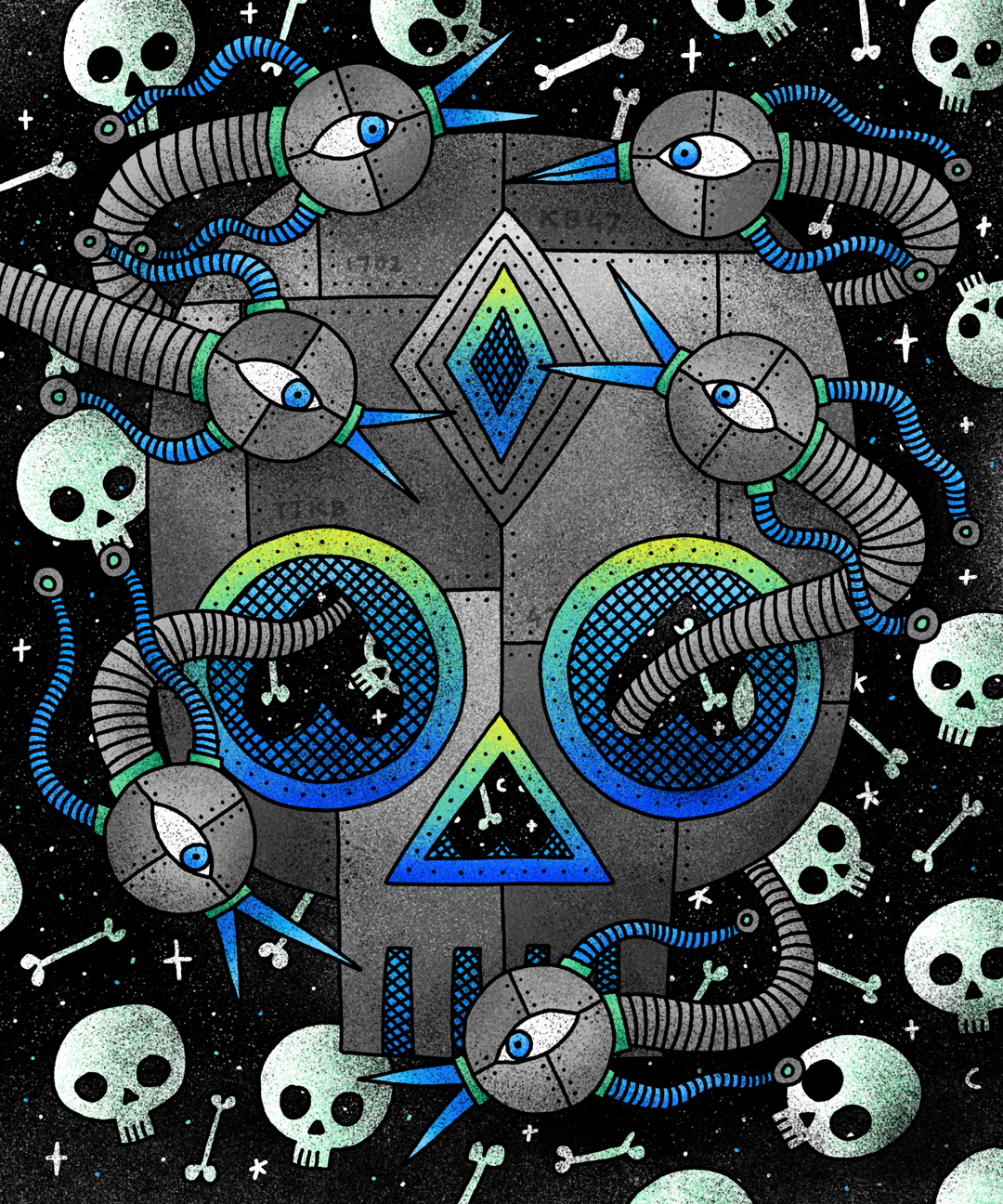 As the bots began to build and create and flourish in their new home, their creations became dark and gloomy death machines—void of any emotion. The Shadow’s influence was unmistakable. And irrevocable. There was no going back to the way things were. The bots needed to be saved. 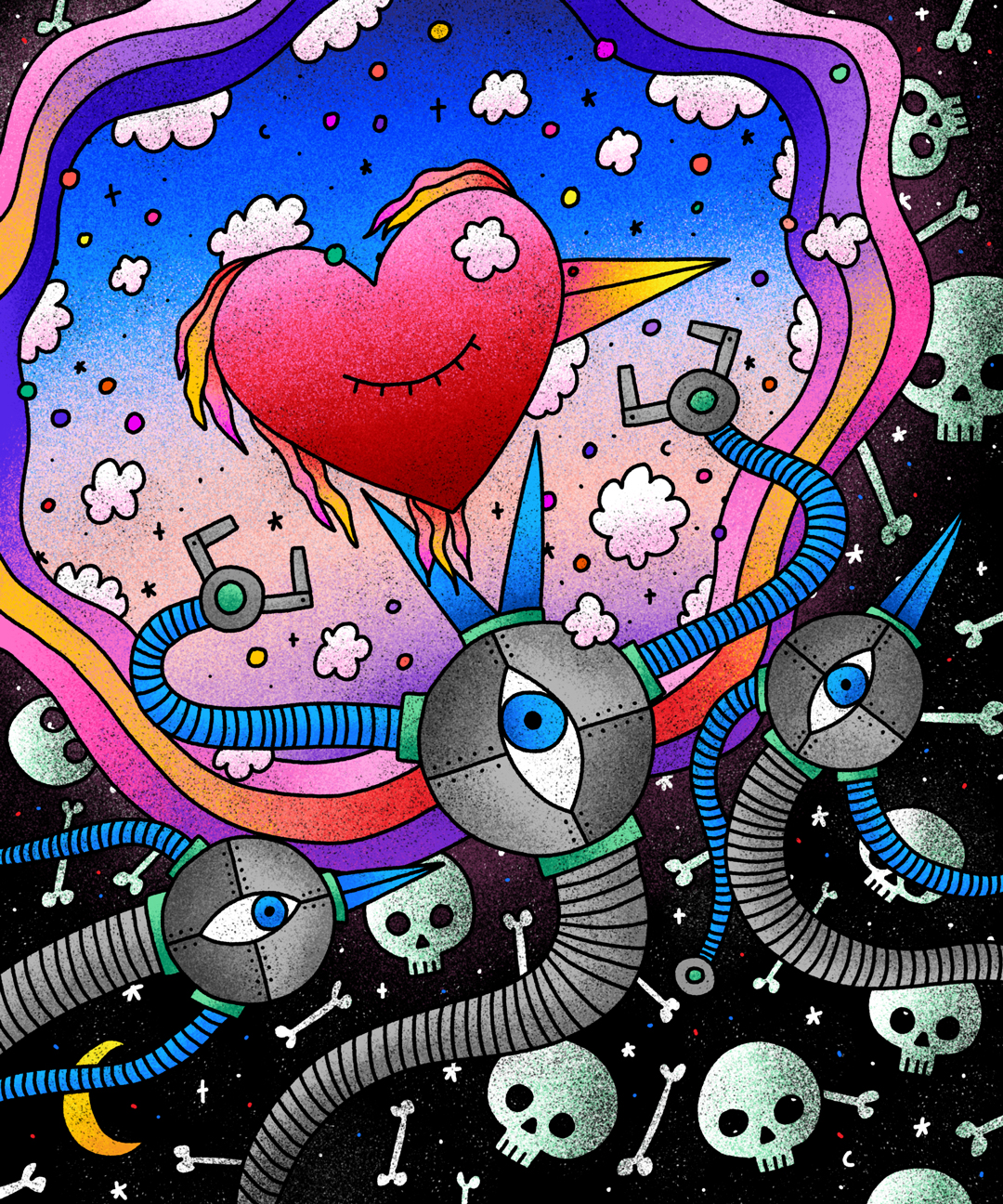 As their last resort, the bots decided to search for flaming warriors—a race of mystical heart-shaped birds scattered throughout The Doodleverse. The bots spent themselves opening windows to others realms in search of the flaming birds. But what they found disturbed them. The warriors they found were asleep, dying, or imprisoned. The Shadow had far-reaching effects. However, the bots began to feel hope circulating inside of their metallic bodies. 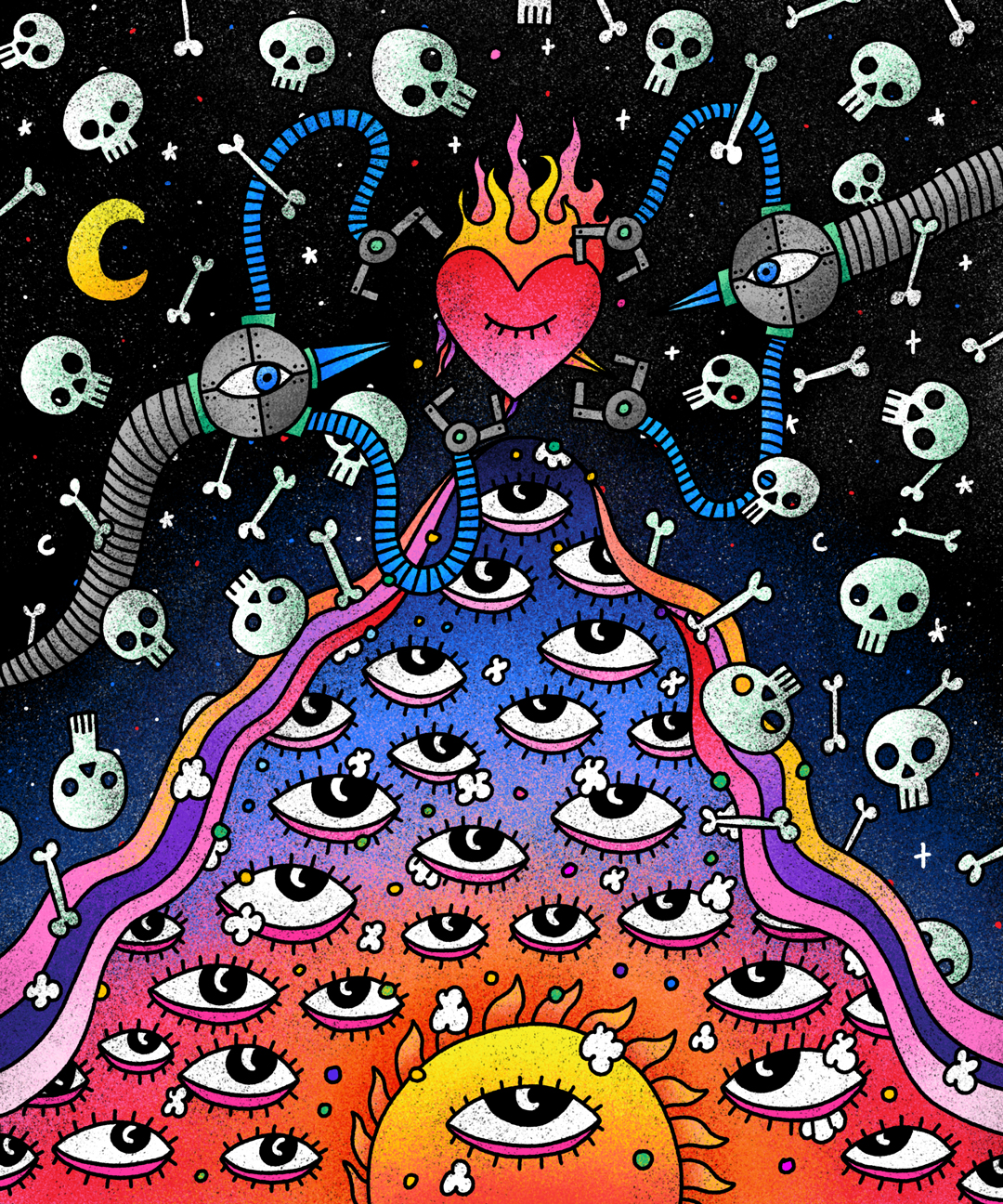 While The Shadow ate away at the once happy realm, the bots restored, resuscitated and rekindled a handful of flaming warriors. A flock of eyes expectantly bore witness as the bots began their work. Faith began to surge within the once-happy realm. 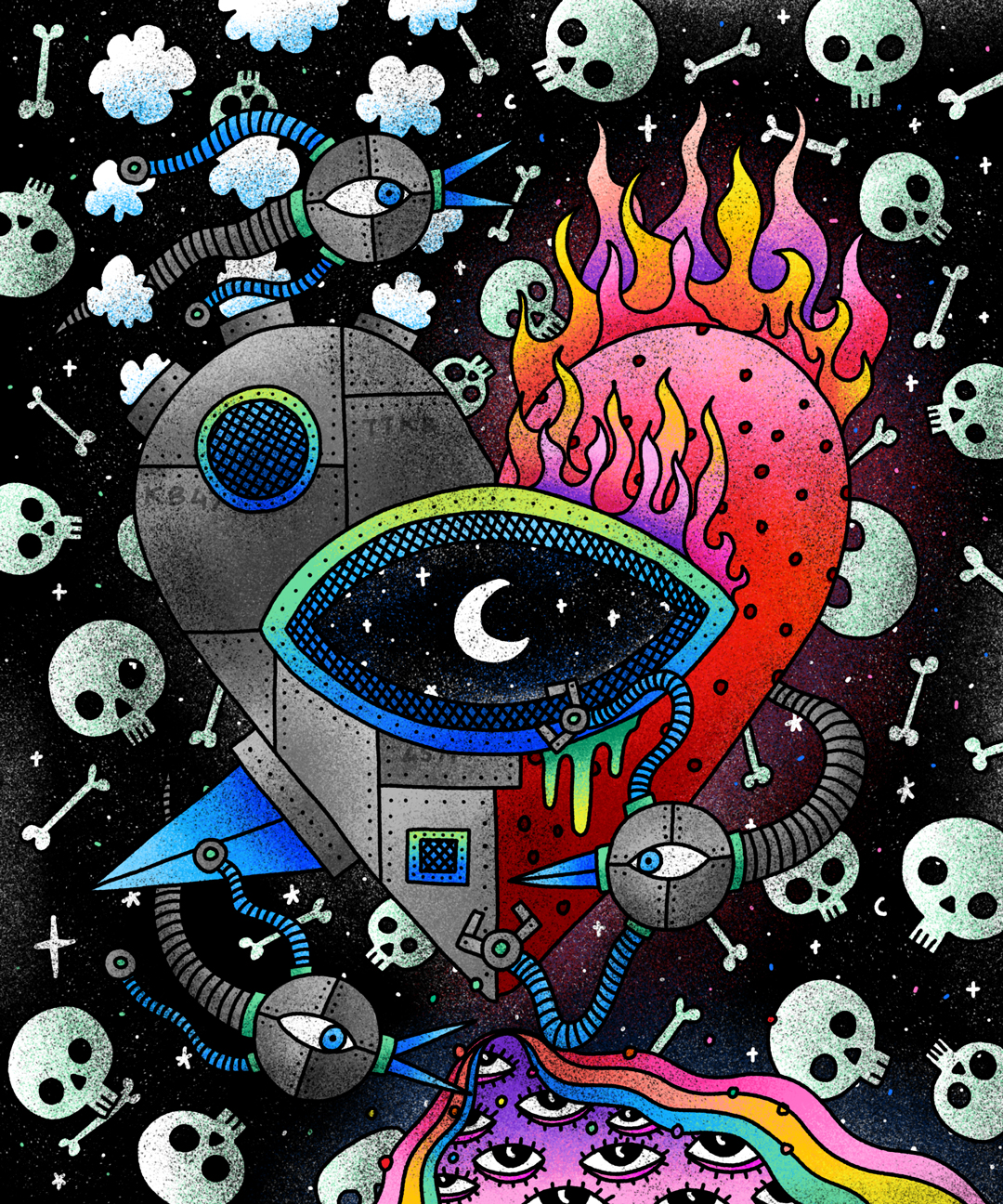 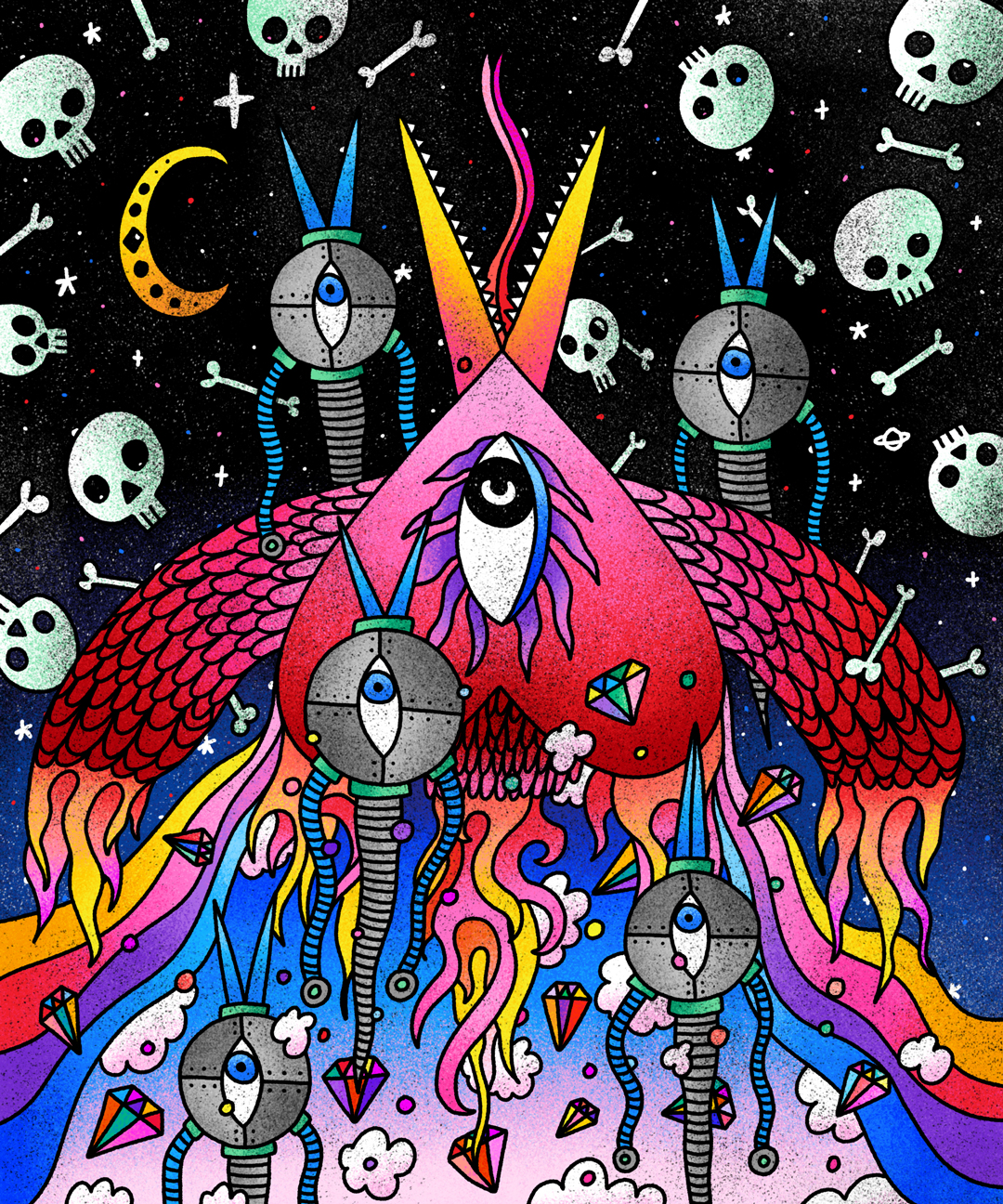 Flaming warriors heeded the call from realms far and wide. They joined ranks with bots and warrior birds. They pitted themselves against The Shadow. Against death. Against empty souls. Against all that void of emotion. 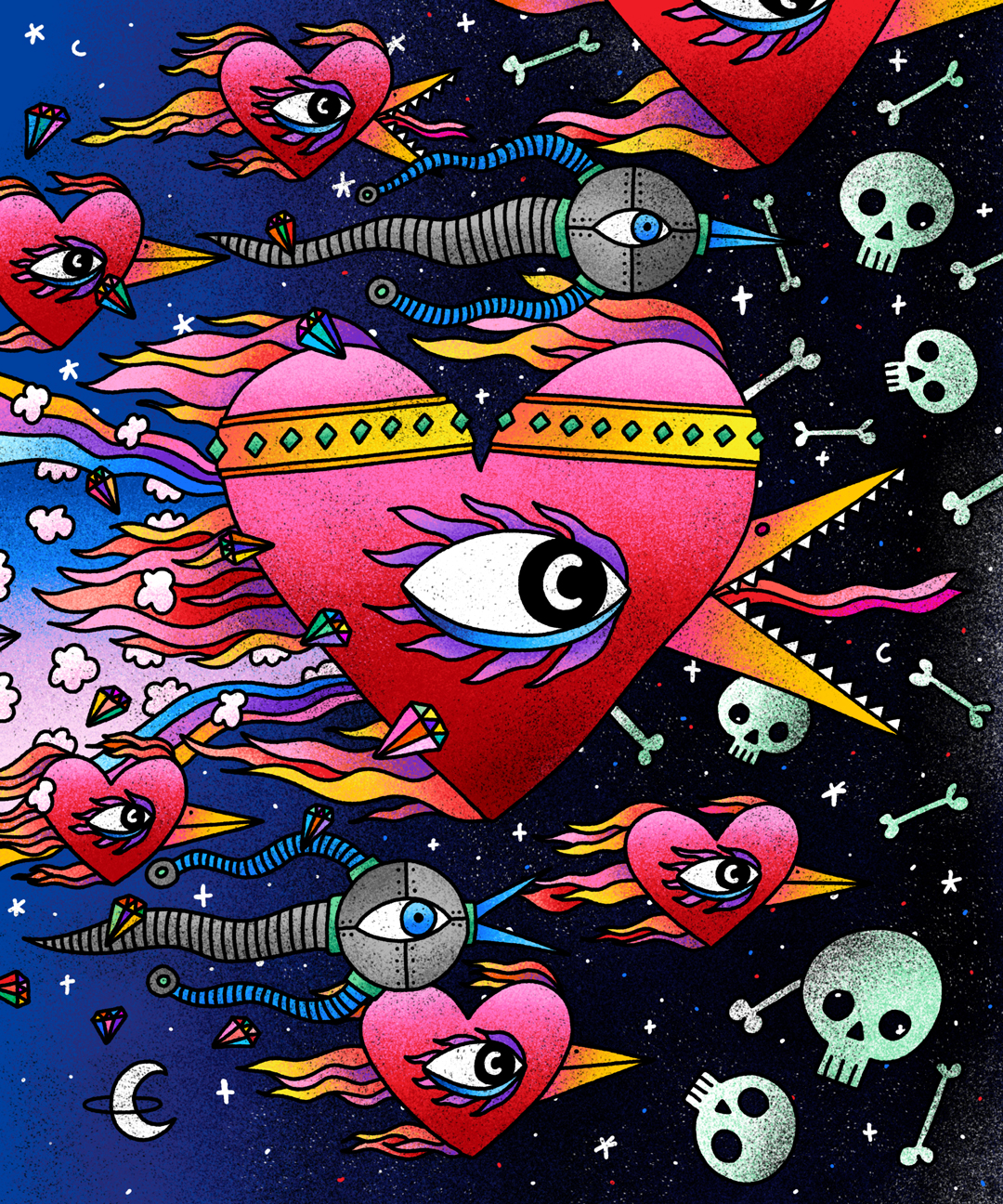 Enraged and furious, The Flaming Queen answered the call and lead her warrior army, with bots alongside, to fight for the happy realm. Together, they purged the realm of death and darkness and banished The Shadow into the cosmic realm. 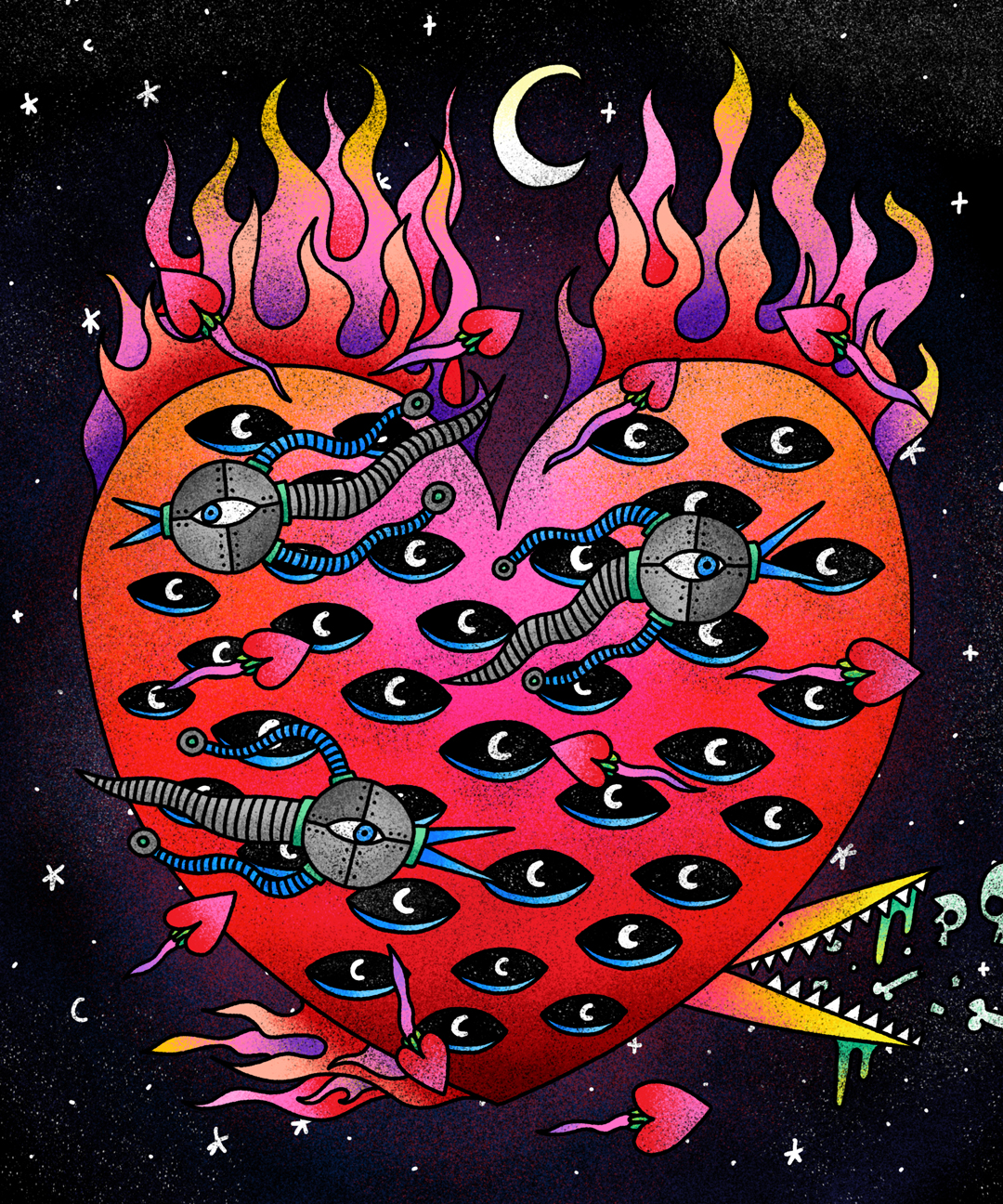 A destroyer was let out into the cosmic realm. To munch. To devour. And burp up remains of The Shadow’s multitude. Who said love was kind and gentle? The Juggernaut was a fierce and ferocious and left no dark thing behind. 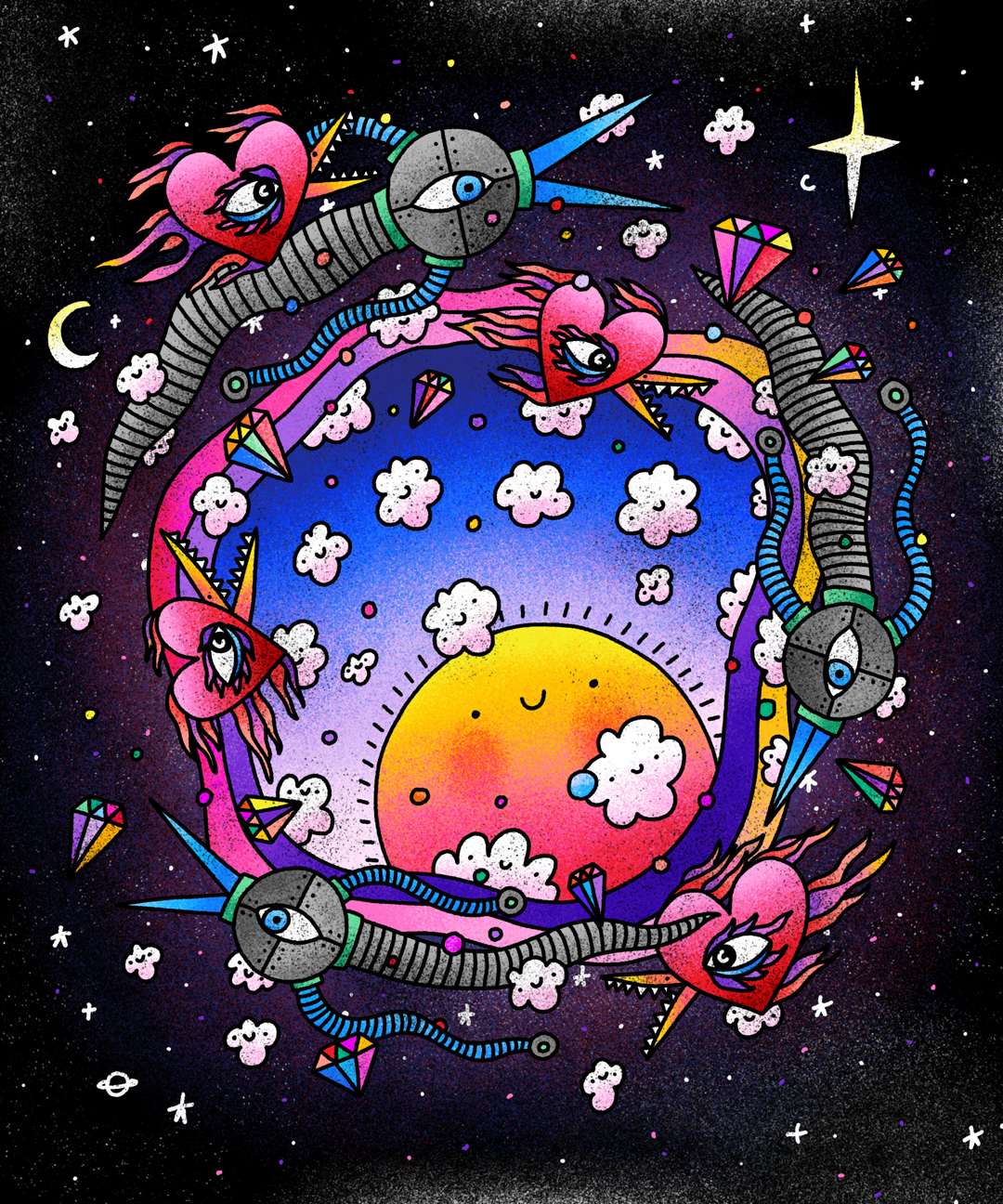 With The Shadow vanquished, the happy realm flourished. An alliance between bots and warrior birds was made. And the borders were kept guard, keeping it safe from future threats.

As a collection, For Love is a 10 piece limited NFT collection on Avalanche that I created with Curated, a web3 gallery investing in artists.

Posted on 31 Jul 2022 in Projects Illustration and NFT #nft